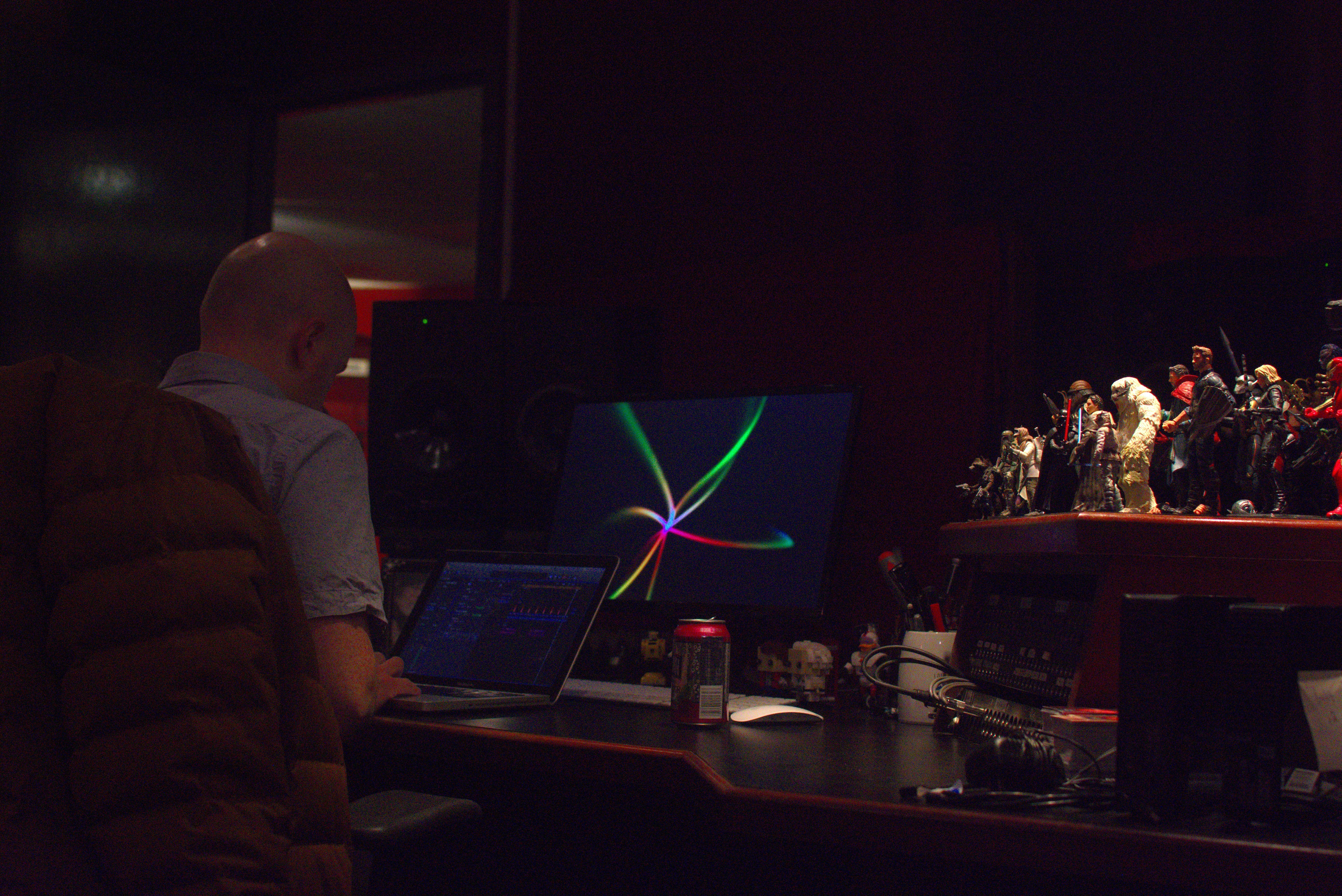 Sorry for the lack of posts the last couple weeks! I’ve had tunnel vision trying to plow through all the commitments on my to-do list.

And a huge to-do on my list has been to finish the mixes for a personal project I started about 18 months ago:

Write and produce a hip hop record (in Logic, of course.)

The project started simply enough. My goal was to produce a couple of songs for my friend who’s a rapper.

But shortly into our working relationship the experience was so positive that we decided to write a full length record.

So over the last 18 months (!!!) we’ve been hard at work writing, recording, producing and scaling our own Mt Olympus.

Logic Pro rules, but it’s really just a means to an end, right?

The goal isn’t to be fluent in Logic for the sake of being really efficient in Logic. It’s about being able to make great sounding music!

How the heck do you find the patience and gumption to push through 18 months of writing a record?

Well, I might be a bit of a perfectionist (I can admit that). But we also chose to embrace some key ideas and strategies.

With the mixes *almost* done, I’d love to share some of the lessons I’ve learned over the last year and a half.

The following 3 lessons have sustained my songwriting partner and I for the entire time. And the following strategies are all VERY purposeful in approach and execution.

How the heck do you manage your expectations, enthusiasm and creativity over such a long stretch of time?

Well, there’s many ways to tackle it. Here’s how we did it:

1. Accept That You Don’t Have a Ton of Time – & Then Work Around It 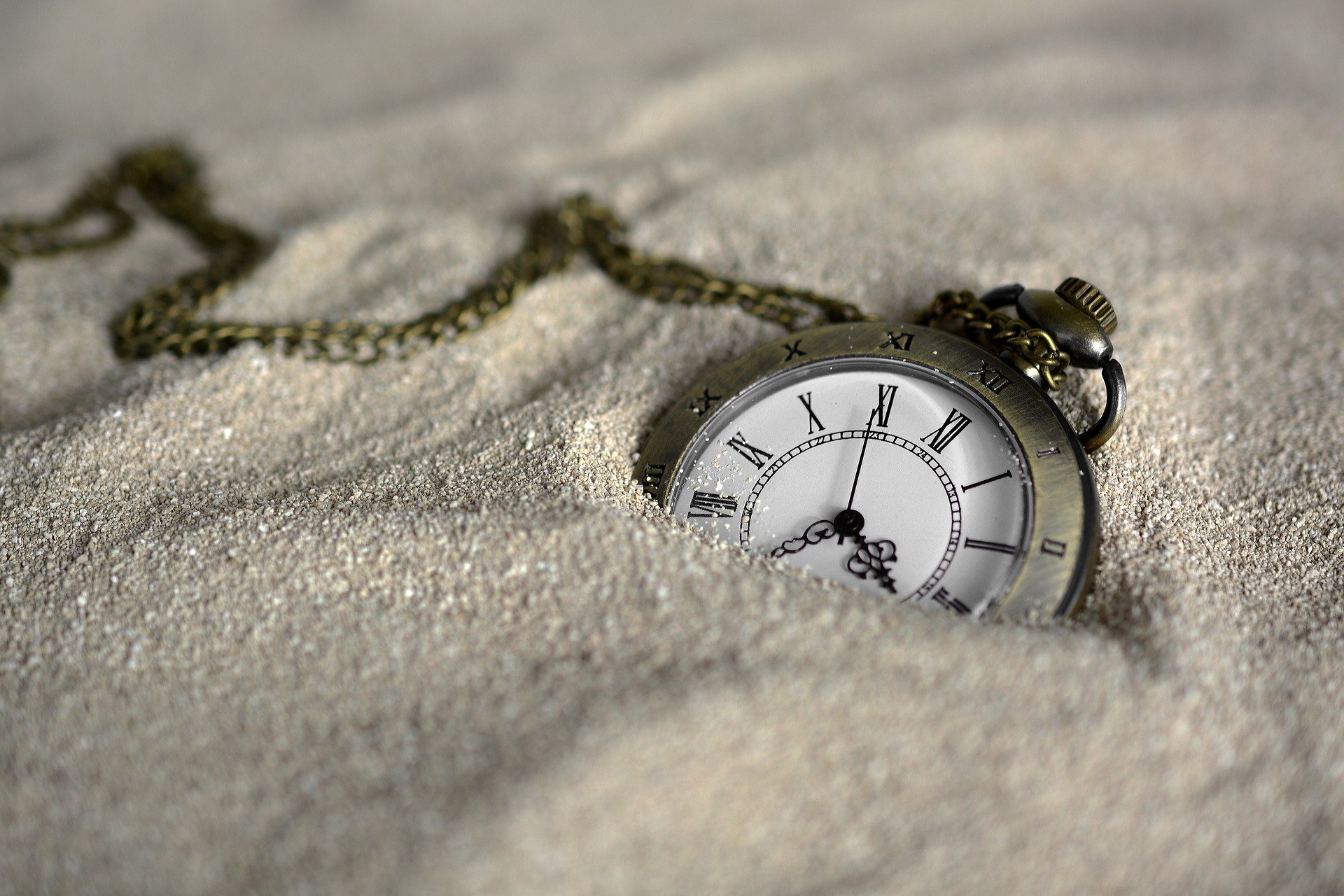 If there’s anything to be said of the 21st century, it’s that we’re all strapped for time.

I bet you and I are very much alike in that we both have A TON to do every dang day:

And many of us are hustling to make music work for our lifestyles (and mental happiness).

So who the heck has time to just hang out and make music???

Not having enough time for music can be a real sore spot for us creatives. That’s why I decided to accept my lack of time, instead of getting upset about it.

How did I accept it?

My writing partner and I decided to stick to a light schedule for the first 8 months:

Between client work, WLPR, my girlfriend, and all the stuff listed above – I just don’t have much time!

And our goal was to have fun making music together.

But it’s kinda hard to have fun when you’re stressing about it.

Our light schedule then turned into 2 nights a week. And now we’re getting together even more as we finish up the record.

But if we tried to bang out a record in a couple weeks? That idea would’ve fallen apart shortly after.

Sticking to a light but consistent schedule kept us motivated to create.

And you know what else? The very limited schedule also helped the creative juices flow!

Walking away from a song can be just as valuable as working hard producing it.

Because we had so much time in-between sessions, we couldn’t help but dream up new ideas for each riff.

So by the time we met up again we had fresh perspective and ideas to dig into.

2. Keep Expectation Low By Focusing on the First 30 Seconds 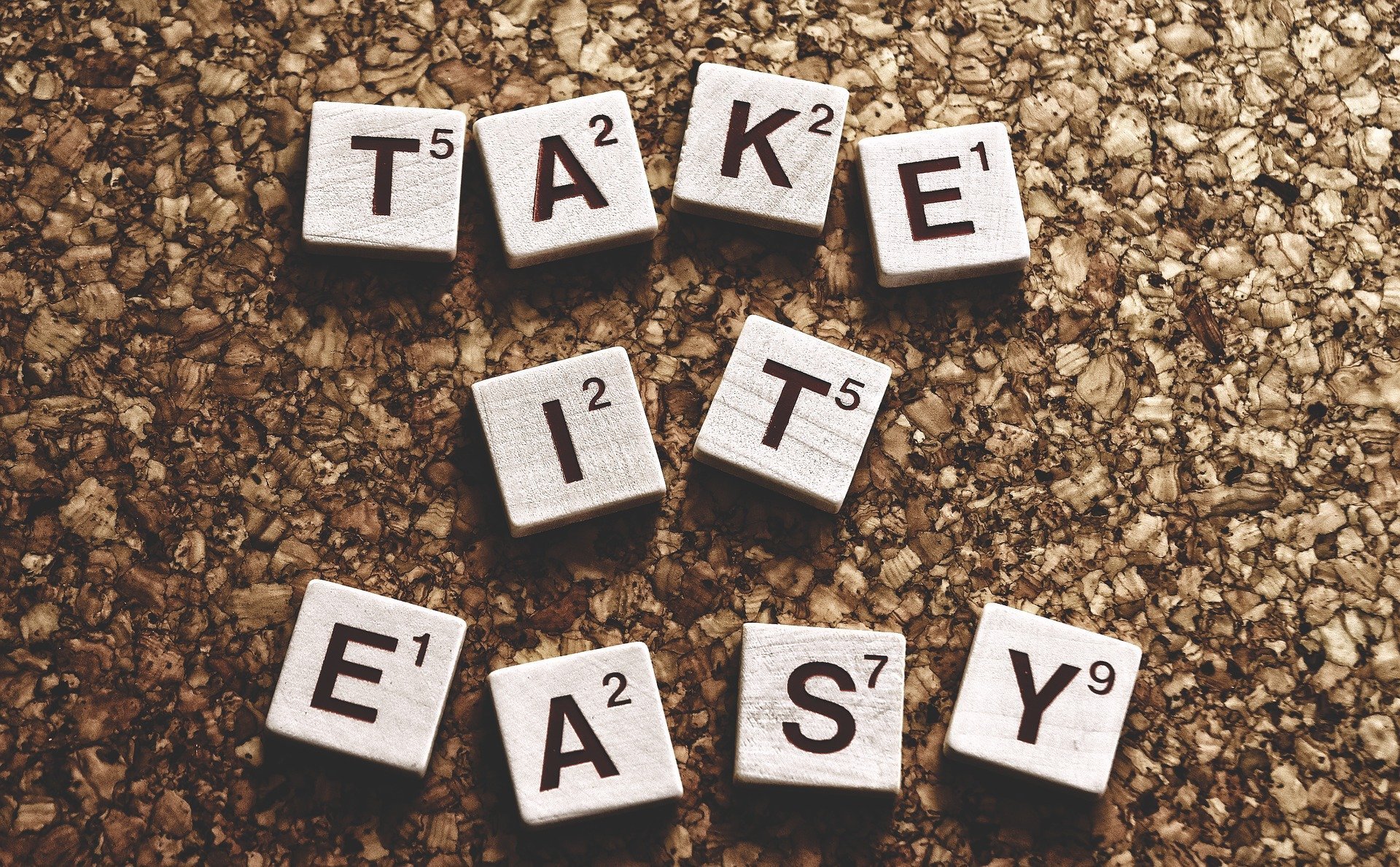 Remember when making music was fun?

You know what I’m talking about. That time you picked up a guitar for the first time, or started messing around with a sampler.

The room for error was huge – because you were just starting out!

And once you began to wrap your head around playing or singing, the real fun started when you were able to write your own songs.

But when the pressure is high to create something brilliant out of thin air – that’s when things can go off the rails.

Music is primarily about feeling. The way music makes us feel is the guiding light to a great song.

And sometimes that guiding light might lead you down some dead end streets.

Which is totally fine! It’s all in how you manage your expectations.

That’s why we made a concerted effort to start off writing only 30 second riffs.

Look – like I said, I don’t have a ton of time. Some people can crank out a hit song in half an hour. But I’m not one of those people.

For me trying to write the best song ever in one shot is like trying to  swallow a whale in one gulp. It ain’t gonna happen!

So instead we gave ourselves an easy goal – write the best 30 second riffs we could (to start off).

1. 30 seconds is an easy goal – meaning we had to be freaking terrible to not succeed.

2. 30 seconds kept us focused on vibe and feeling – our 30 second goal was light and breezy. Which helped us focus on the vibe of a riff.

3. 30 seconds makes it easy to trash bad riffs – you ever notice how hard it is to throw out a song you’ve been working on for months? That’s cause your ego is all wrapped up in the work. It’s way easier to let go of a bad riff when you’ve only spent an hour or 2 on it.

(In fact in the latest issue of Sound on Sound, they interviewed one of Britain’s top production teams, TMS LDN. And in the article the production team said they focus on 15 second riffs. Oh, and they’re Logic users. How about that?)

3. Embrace Collaboration (& Avoid the Word NO) 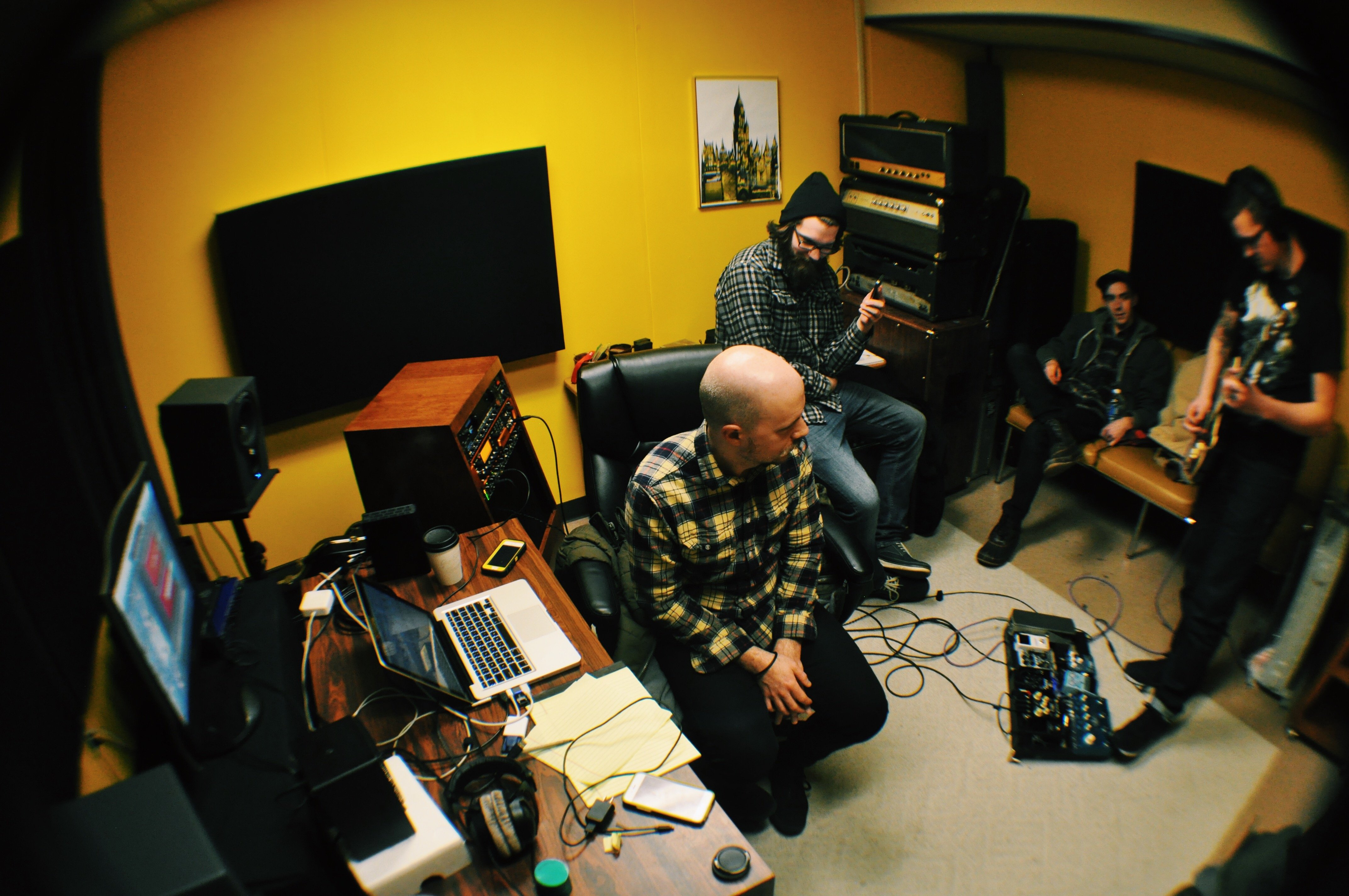 Way back when I played in bands, the songwriting usually worked like this:

Why? Because songwriter guy usually didn’t trust the rest of the band to write good music. Or it wouldn’t fit in with his songs. Or whatever.

I definitely used to be one of those songwriter guys. Then I decided for a while to write music by myself. (Who needs those guys anyways???)

Lemme tell you – writing music with other people is FAR more fun than writing by myself.

This go around I decided to do 2 things:

Obviously I chose to write with my friend. So the experience was going to suck if I couldn’t get my ego behind me. But I also wanted some of my other friends to contribute to this record as well.

But for this whole thing to work, I knew I had to give everyone the same amount of room to succeed (and fail).

That’s why I chose to avoid using the word “no.”

Does everyone have a brilliant idea all the time? Of course not. But it’s hard to stumble on the gems if I didn’t allow people to throw not-so-good ideas against the wall.

And since my partner and I were at the helm of the project, I knew the buck stopped with us.

So if someone wants to try something that sounds dumb in theory – who cares? We can nix it later.

We literally gave our friends free reign to lay down any ideas they had.

And you know what?

The amount of amazing, brilliant contributions they made FAR outweighed anything we didn’t enjoy.

Thanks so much for sticking with WLPR! Many of my obligations are now completed and off my plate.

And for the big one – my white whale if you will – is almost complete as well.

This record we’re releasing is by far the most satisfying musical experience I’ve ever had. And it’s thanks to the strategies we adopted:

(P.S. I’ll be sure to share the record with you when it comes out 🙂