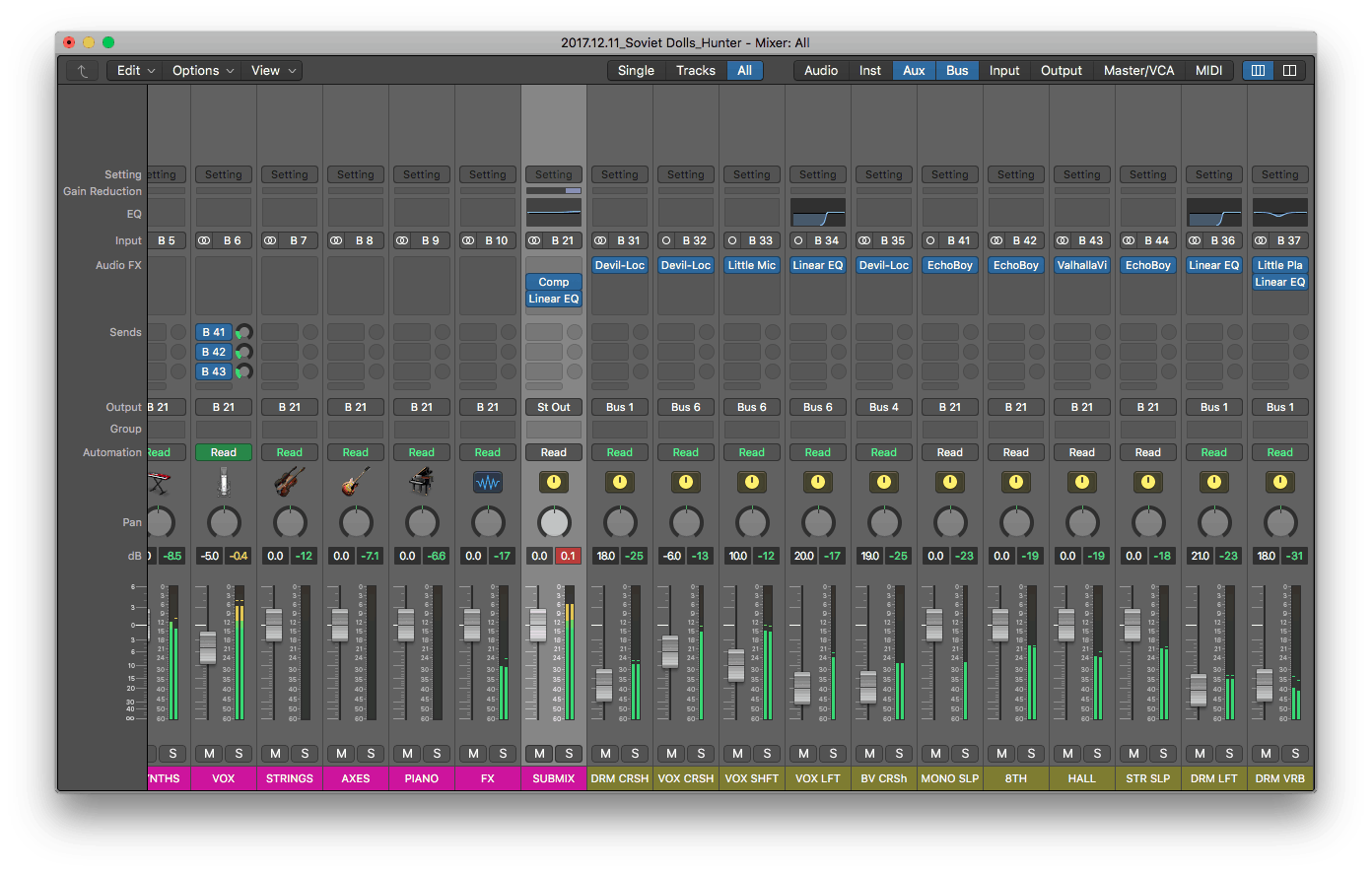 Bussing in Logic Pro X is a super power that often gets overlooked by Logic users.

For example, the other day I was talking to a friend. He was working on a project and wanted to geek out about Logic.

He whipped his Macbook around to show me what he was working on. And the first thing I noticed was that he had Space Designer on every single track.

As he spoke, I couldn’t even focus on what he was saying. All I could do was think about how much CPU he was wasting by not using busses.

Busses are your shortcut to:

And by not bussing in Logic, you’re screaming to the world: 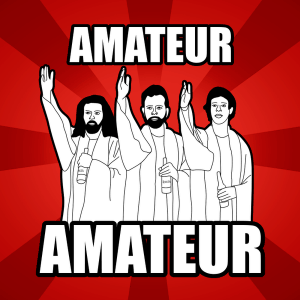 Don’t get caught being a basic Logic user. Let’s upgrade your workflow with bussing.

Step one when it comes to bussing in Logic is to first figure out what the heck all the weird words actually mean!

If bussing intimidates you, I bet it’s because of the words we use. Such as:

When you have 3 words that kinda mean the same thing, but aren’t the same – it gets confusing.

Let’s define each word so you can get past thinking about them:

What is a Bus? 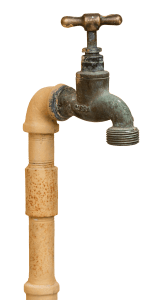 Before we go any further, what the heck is a bus?!

Imagine the plumbing in your house. Most likely you have running water in your kitchen and bathroom.

But that water doesn’t just appear. It needs a way to get into your house.

Modern plumbing uses pipes to get water into your home.

And busses are pipes for audio.

When you hit play in Logic, its like you turned on the faucet. That audio only goes in one direction – to the Stereo Output.

But say you want your audio to go somewhere else, like a reverb. How do you get it to that reverb?

Busses allow you to create pipes between tracks. You can combine tracks, send them to effects, or send them just about anywhere you need them.

What is a Send?

If you take a look at the Mixer Strips in Logic, there are a couple of empty fields with some empty looking circles.

These fields are your Sends.

A send is like the on-ramp for the highway.

Your audio hops onto the on-ramp, and slides its way down your bus to it’s intended destination…

What is an Aux? 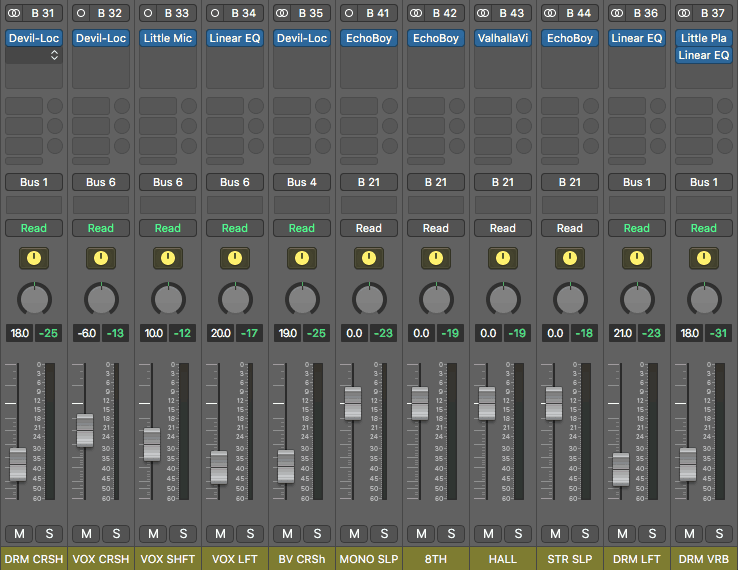 Auxes are just like any other channel in your project. The difference though is audio doesn’t live on your Aux, like it does on other tracks.

It’s sent to your Aux.

The Aux is like the faucet your water spits out of in your kitchen.

So if you put it all together the flow looks like this:

Controlling the Flow of Sound

Now you know what the heck these words mean. The next step is putting the pieces together.

When you click on one of those empty fields, a menu will pop up for creating a send:

The next step is to pick which Bus or pipe you want to send your audio through.

What’s awesome is once you pick your bus, Logic automatically creates an Aux for you:

Now your audio has a place to go!

Throw your favorite reverb on that Aux, and you can send as many tracks as you want to it.

But then you need to decide how much audio you want to send to that Aux.

Turning on the Faucet

Your Send is the on-ramp. But just like your kitchen faucet, you need some way to control how much audio comes out.

Thankfully, you can choose how much audio is sent to your Aux with the circular volume knob:

You probably don’t want your track drenched in reverb. Or maybe you do!

The Send Volume is your way to decide. Bump it up or down to fine-tune the volume.

But you can also send it full-blast to your Aux, and just turn the Aux volume up or down.

The audio plumbing world is yours to decide 😉

If things weren’t hazy enough, there’s another set of words to wrap your brain around.

When you dig into the Send menu, you may notice another set of foreign looking phrases:

All these phrases are asking you one thing – when do you want your audio sent to your Aux?

Post Pan means that your audio is sent to your Aux after your:

This is Logic’s default, and for good reason.

Usually when you pan your audio, you’d like your Reverb or Delay to do so as well.

So Post Pan makes sure that your track’s panning is sent to your Aux.

And if you decide to turn down your audio track with the fader, wouldn’t you like the reverb to turn down too?

Post Pan covers all your bases so that Reverb plays nice.

Post Fader sends your audio after your Channel Fader, but before your panning.

But why? Why wouldn’t you want to your Aux to pan with your track?

Well say you want to create a panning echo effect. So you hard pan a guitar to the left, but want the echo to come from the right.

With Post Fader, you’re able to hard pan the Aux to the right independently from your original track. Giving you flexibility with your Auxes.

But if you turn that guitar up or down, the Aux will also get louder or quieter.

The final frontier. Pre Fader sends your audio before either your channel fader or your panning.

This gives your aux complete separation from your original track. It’s like you created a copy of your track. And now you can process it however you want.

And even if you mute the original track, your Aux won’t stop playing.

But Why Bus to Begin With?

So why use a bus to begin with?

There are a lot of reasons! Most often it’s to save you CPU by sending many tracks to one effect, instead of loading tons of effects.

Here are 4 reasons to use Bussing in Logic:

1. Save CPU by Sending Your Tracks to Effects Plain and simple – plugins take CPU to run. And the more you have in your session, the more CPU they need.

Hate System Overloads? A huge step to kicking them is to send your tracks to an effect instead of loading the same effect on every track.

For example, if you want to use Space Designer for a nice hall reverb, you could either:

And this works for Delays, Parallel Compression, and anything else you might want to blend with your tracks.

Another great reason to use a bus is when you want to process a group of instruments together.

The classic example is when you want to process a drum kit. You can do this by setting the Output for every drum to the same Bus: 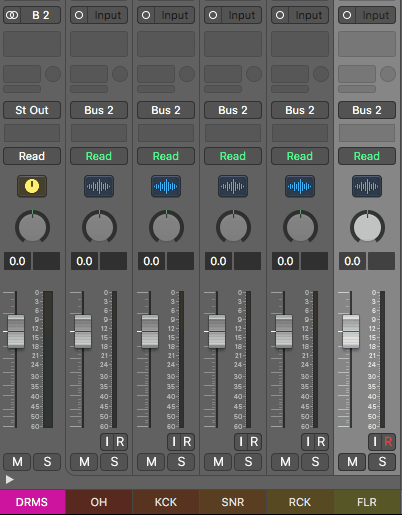 And now you can EQ, compress, or do anything you want to the entire kit.

Want a fast and easy way to group your instruments together? Use Track Stacks.

Logic will create a new Bus and Aux, and route all your selected tracks through that Bus to the new Aux.

3. Send All Your Tracks to a Submix

For example, you might want to use EQ or compression on your whole mix.

But say you have a Reference Track in your session to compare your mix against. Well, any EQ or compression you use on your Stereo Output will also affect your Reference Mixes.

But if you send all the tracks in your mix a separate Aux, you can process your whole mix while leaving your Reference alone.

So if you have tracks you don’t want to process, don’t send them to the Submix.

Sometimes when you’re recording a musician, they want to hear some instruments more than others.

And if you’re recording more than one musician, each one may want a different headphone mix.

By sending your mix to separate Auxes, you can send those Auxes to separate headphone outputs.

And then you can use the Send Levels to create custom mixes for your musicians!

In this case, you can send all your tracks to a new Bus. And with that Bus, you can set its Output to a Headphone or Balanced Output.

Voila! Now you have a separate Headphone Mix for your musician. Just adjust the Send levels to create a custom mix.

Bussing in Logic Pro X is too helpful to ignore. And with the ability to route audio wherever you want it, you can do some pretty cool stuff.

Don’t forget your routing options either: