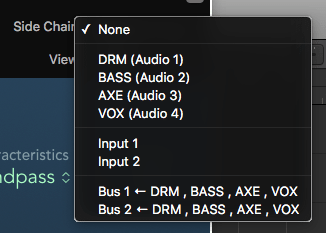 Have you ever wished that your tracks could listen to each other?

For example, say you’ve got a killer kick drum that drops right at the perfect spot. But the bass just seems to steal that kick’s subby glory.

Wouldn’t it be great if  your bass could hear that kick drum, and step to the side to let that kick really thud?

That’s what Sidechaining in Logic is all about. Sidechaining gives your tracks a set of ears that listens to another track or instrument.

But how do you Sidechain in Logic Pro X? And when should you?

Easy! It’s all really a matter of what do you want to accomplish.

Sidechaining gives you the ability to let your tracks listen in on each other. But what they do totally depends on the plugin you’re using to listen with.

Plugins are the key to connecting Sidechains. How do you know if a plugin can Sidechain? Just look in the upper right-hand corner of the plugin window:

In this case the Gate has the option to listen to another track.

Click on the menu, and you can see a list of all the inputs, tracks and busses in your project:

These tracks are all available for the Gate to listen and respond to.

That’s the question, isn’t it?

We Sidechain because we want a plugin to listen to the Sidechain track, but respond on the track it’s inserted on. 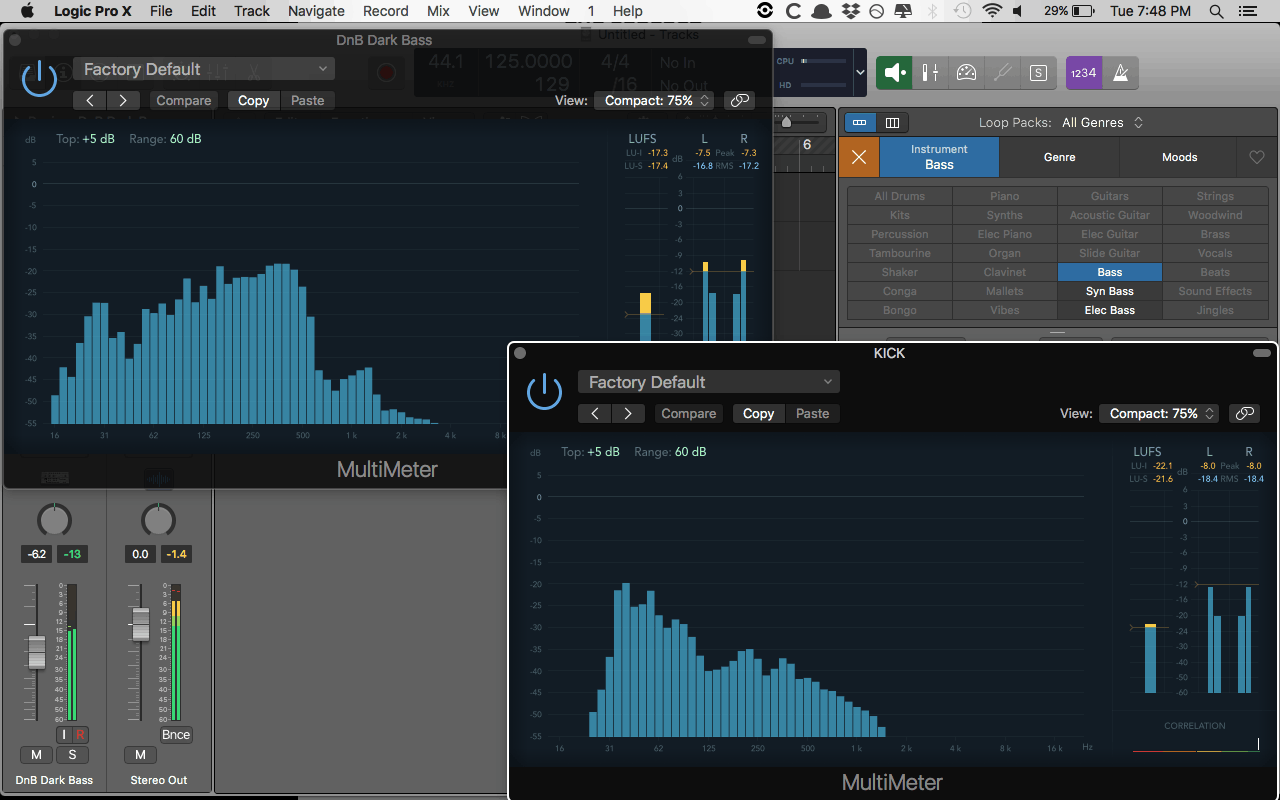 The classic Sidechain scenario is our deep kick and bass are fighting for space in the low end.

Since both the bass and kick are low end instruments, they tend to get in each other’s way. This sucks, because pro mixes rely on a the low end to be both tight and powerful.

The thing to remember is that bass notes tend to sustain while kick hits come and go quickly. If the bass can drop in volume each time a kick hits, something magical happens.

You won’t lose the bass, but you’ll have room to hear the kick!

Logic’s Gate is perfect for this. It can reduce the level of the bass every time the kick hits.

To do this, insert Logic’s Gate on your bass track. Then set the Gate to Ducker:

Then go up to the Sidechain menu, and select your kick track.

From here, all you need to do is adjust the Threshold and Ducking on your Gate while you watch the Open and Close meters:

And what happens is every time the kick hits, your bass will duck in volume. Thus, your kick can now enjoy the space it needs!

Other Reasons to Sidechain in Logic Pro X

There are many reasons to Sidechain! Here are some options to consider:

A very common snare trick is to have a blast of white noise under snare hits. the white noise acts like a bottom snare track and adds aggression. 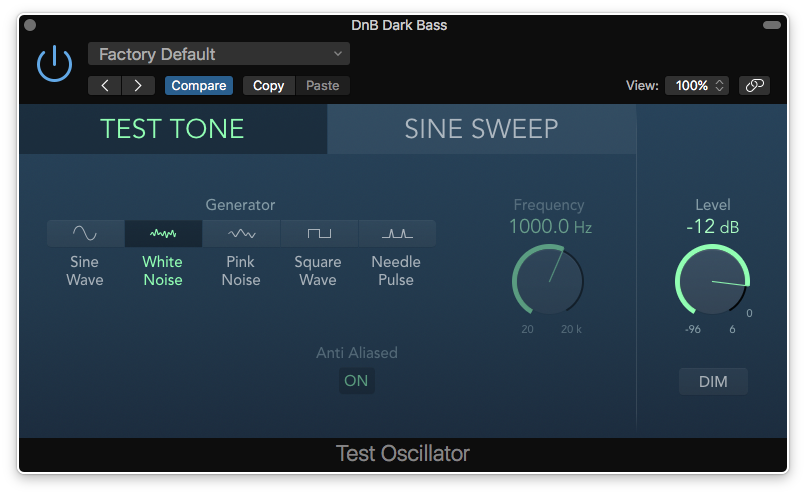 Then open Logic’s Gate on the same track. But this time, set it to Gate instead of Ducker.

Select your Snare track in the drop down Sidechain menu. Once again, play with the Threshold. But leave the Reduction set at -100 dB.

Find the Threshold where the white noise only occurs when the snare hits, and adjust the Attack, Hold, and Release on the Gate to taste. 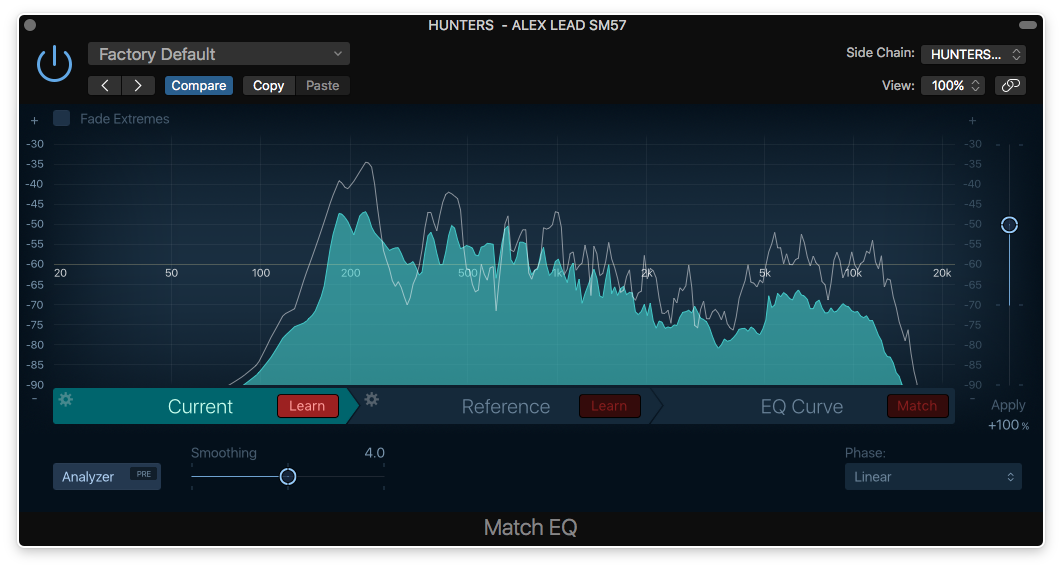 Match EQ is awesome for matching the EQ curve of one track to another. And it actually relies on the Sidechain to work.

Say you have a vocal track you recorded two weeks ago. And today you want to rerecord some of the vocal parts.

After recording the touch-ups, you find that the vocals don’t sound quite the same.

There’s a lot of reasons this could be:

In any event, Match EQ can help your vocals achieve some consistency.

To do this, let’s assume you tracked the new vocals on a separate track.

Place Match EQ on the new vocal track. Set your original vocal track as the Sidechain.

Now hit Learn on the Current tab and hit play:

Match EQ will start to learn the new vocal EQ curve. Once the curve seems to stop moving, hit Learn again to stop the process and hit Spacebar to stop playback.

Now hit Learn on the Reference tab. Find a section of the old vocal, and hit play. Once the Match EQ curve stops moving, stop playback and hit Learn: 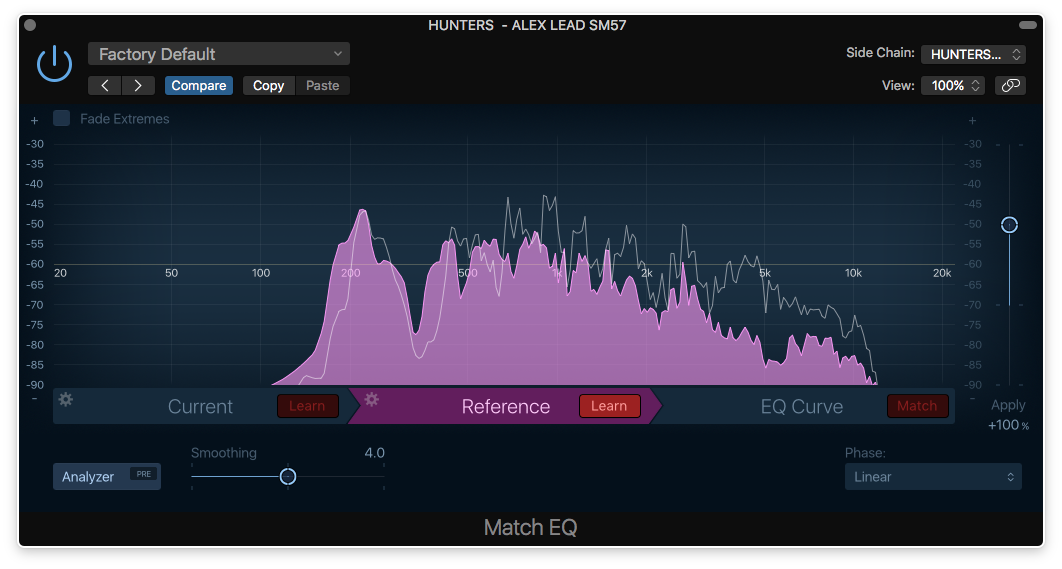 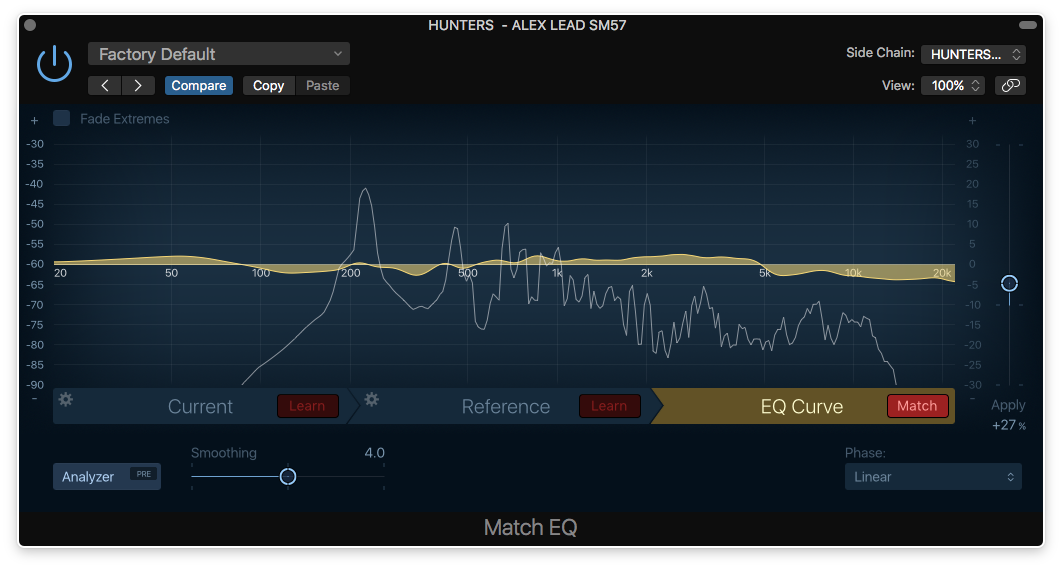 Now Match EQ will adjust your new vocal’s EQ curve to match the old curve! Use the Apply slider on the right to adjust how aggressive Match EQ is.

And now you can get that new vocal take to match closer with the old one. Or vice versa!

Sidechain Autofilter to React to Other Instruments 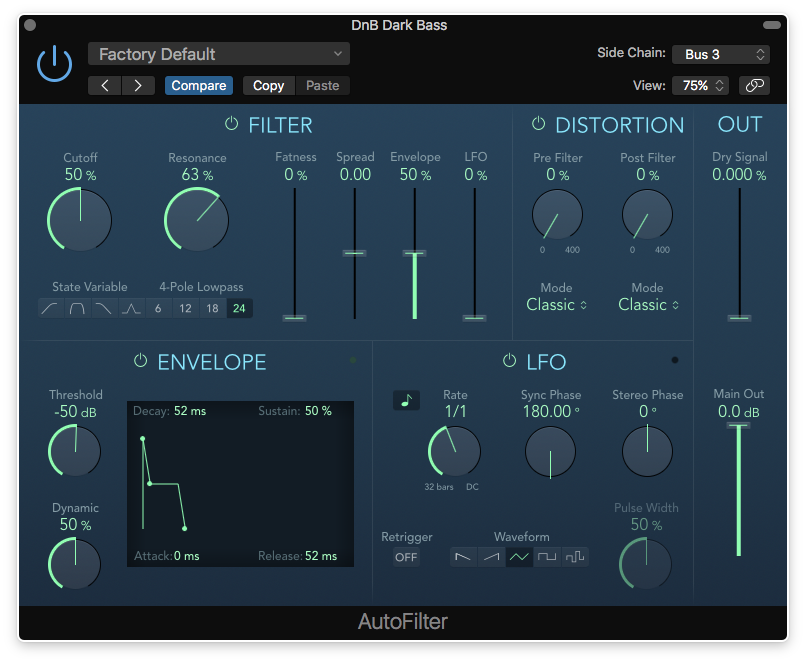 Not all Logic effects are Sidechain-able. But the Filters very much are.

By Sidechaining Autofilter, you can have Autofilter do some awesome stuff.

Place Autofilter onto a synth track. And then choose a snare or kick track in the Sidechain menu on Autofilter.

From here, adjust Autofilter’s parameters. You can even just start with the default settings. Try setting the Resonance to 50% so you can hear the effect more obviously.

Every time a drum hits Autofilter will react, giving your synth a gnarly effect.

The possibilities with Sidechaining are endless. And many 3rd party plugins open up more creative opportunities as well.

Remember, Sidechaining allows your tracks to listen to each other.

They listen through plugins that have a Sidechain menu. And your plugins listen to the Sidechain, but react on the track they’re inserted on.