If there’s one problem I see far too often in other Logic Projects, I would sum it up in 2 words:

Many Logic users don’t realize how important volume actually is when they’re recording and mixing their Projects.

It’s not that they’re trying to do untold harm to their music. It’s just not super obvious exactly how Logic deals with volume.

On the other side of the coin, there are times when volume doesn’t hurt anything at all. Despite what you may read online.

Because of Logic’s complex floating point-based system, you could be clipping every single channel in your Project. And everything would still be okay and unharmed.

But wait – what the heck is clipping, anyway?

If the above has left you scratching your head, I don’t blame you. That’s why today we’re going to dissect the curious nature of volume in Logic.

Volume matters the most at 4 crucial moments in Logic. If we make sure to respect these 4 moments, you can be sure your recordings are the best they can be.

But if we don’t respect those 4 crucial moments, your recordings can be damaged in the process.

And the issue of volume and audio clipping isn’t specific to Logic. In fact, just about every DAW follows these same set of “laws.”

So let’s be sure your recordings and Projects can live to their full potential.

The 4 Critical Moments of Volume in Logic Pro

“Who’s this phantom of volume you keep going on about?”

Audio recording can be confusing sometimes, don’t you think?

In some cases it’s so easy. Buy a recording interface and microphone, plug them into your computer, and boom.

You’re ready to make a masterpiece.

But then it turns out there are a million and one issues you need to be aware of:

Volume is one of those issues.

Thankfully, managing volume isn’t complicated. Rather, it’s about being aware of your audio levels.

There are 4 crucial moments when volume matters most:

These 4 moments are critical because our audio is being converted into an Audio File.

In our modern era of digital recording, audio files have huge amounts of dynamic range. As long as your Logic Projects are set to 24-bit, you have all the range you’ll ever need.

(Here’s a fantastic article from X that explains how much dynamic range we actually enjoy in digital audio: https://www.sounddevices.com/32-bit-float-files-explained/)

But digital audio has a cap on how loud any file can actually be. Which is where most folks run into problems.

That cap is at 0 dB. Which, conveniently, is the number at the top of the Logic meters: 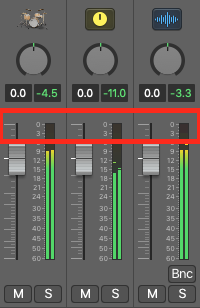 When Logic converts audio into a new Audio File, it’s literally impossible for our audio files to go above 0 dB. 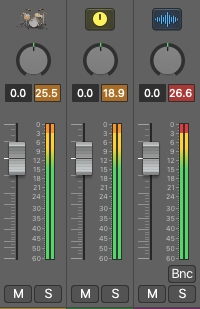 When Logic converts that audio into a new file, that +35 decibels are gonna get chopped off.

When a track or Channel Strip exceeds 0 dB we say the track is clipping. And when Logic creates an audio file from a clipping track, we consider the new audio file clipped.

And the result of this clipping will be nasty digital distortion. 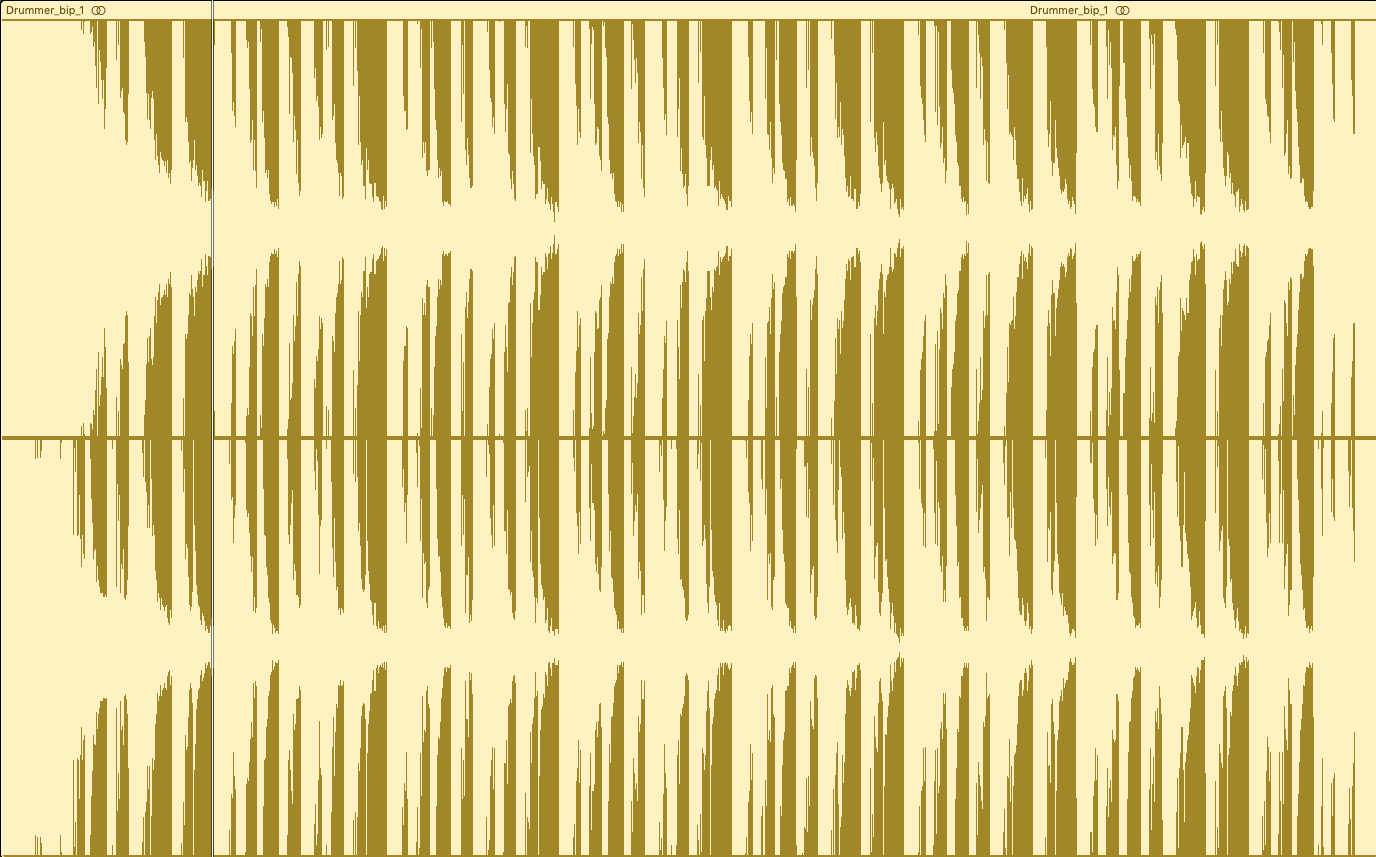 What happens when Logic chops off that extra 35 dB from your audio files?

Well, since the signal is being leveled like a lawnmower ran over it, it distorts. And when a signal exceeds 0 dB we say that the signal is clipping.

The negative effects of clipping can range from “not a big deal” to a “big deal.” It all depends on the amount of clipping.

The more a signal clips, the more distortion will be “printed” into the audio file.

With the snare it’s just the very tippy-top of the occasional peak that’s compromised. With the vocals, it’s 15 decibels of dynamic range that’s leveled from the file.

You’ll know if a track or Output is clipping if the little tag above the meter shines orange or red:

Clipping is like a distortion plugin. The more we push our signal against the ceiling of the plugin, the more it distorts.

And in audio, that ceiling is 0 dB. As a result, your tracks are losing significant amounts of their dynamic range.

How to Manage Levels For Recording in Logic

But most clipping is undesirable. And often clipping occurs because we don’t know that it’s happening.

And not knowing is the most insidious problem of all.

Like I mentioned above, clipping matters most when we’re recording, bouncing or exporting.

When it comes to recording, all that matters is that our audio tracks don’t exceed 0 dB while we’re recording.

Sometimes we can get away with recording levels close to 0 dB. For example, a shaker is probably going to stay pretty consistent level-wise without any big changes in volume.

But a vocalist can go from whisper-quiet to screaming loud in no time flat.

In this case, I suggest turning your audio interface’s preamp gain so that the signal reads between -18 dB and -12 dB on your Logic meters.

That will leave plenty of room in case your vocalist or drummer has any dramatic changes in volume.

For more stable signal levels you can set your interface’s preamp to a higher level (as long as it’s still below 0 dB). A shaker or a distorted electric guitar is less prone to massive swings in volume.

From there, if you need to adjust the volume of a track in your headphones, it’s easy:

Fader and plugin levels come after the recorded signal level. Adjusting your track’s level with a fader or plugin won’t change your recording level.

Which means you can have your cake and eat it too.

How to Manage Levels For Bouncing and Exporting 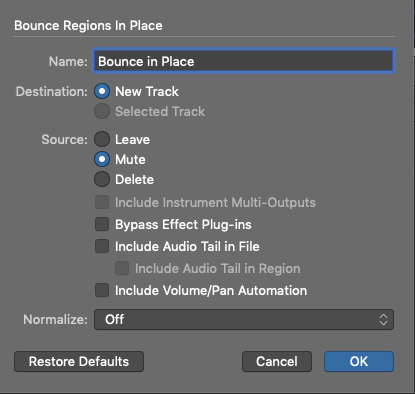 Remember, clipping can occur at any time we create new Audio Files.

Bouncing in Place is a great way to fully commit edits or effects to an Audio File.

For example, let’s say you’re running into System Overloads on your Mac when you try to play your Project. Bouncing tracks in place can create a new Audio File with your Flex Edits and plugin processing.

Then you can power down the original track, which reduces the strain on your Mac’s resources.

But once again, we have to make sure your track isn’t clipping when we Bounce in Place.

So we can do this by adjusting the level of the last plugin in the chain or with the Logic Fader.

If you choose to adjust your track’s level with your plugins you’ll want to make sure to not enable Bypass Effect Plugins. 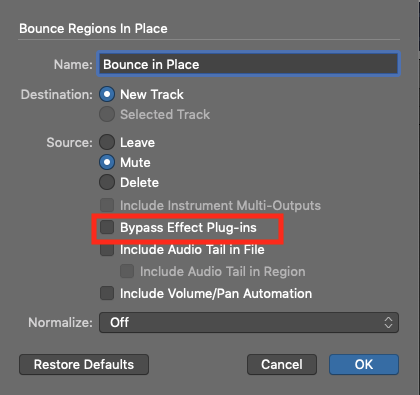 And if you want to use your Fader to adjust your track’s level for Bounce in Place, you’ll want to make sure to enable Include Volume/Pan Automation. 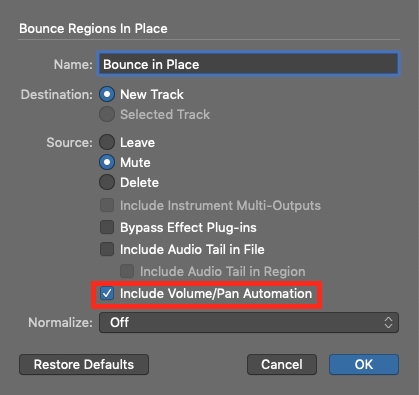 But there’s another option that won’t require you to adjust levels at all… and that’s with Overload Protection Only.

In the Bounce and Export dialogues, there’s a section labeled Normalize. And within the Normalize dropdown menu is an option called Overload Protection Only: 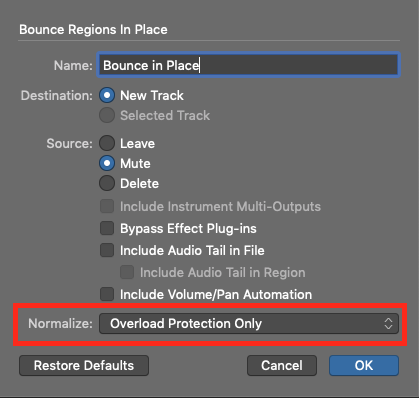 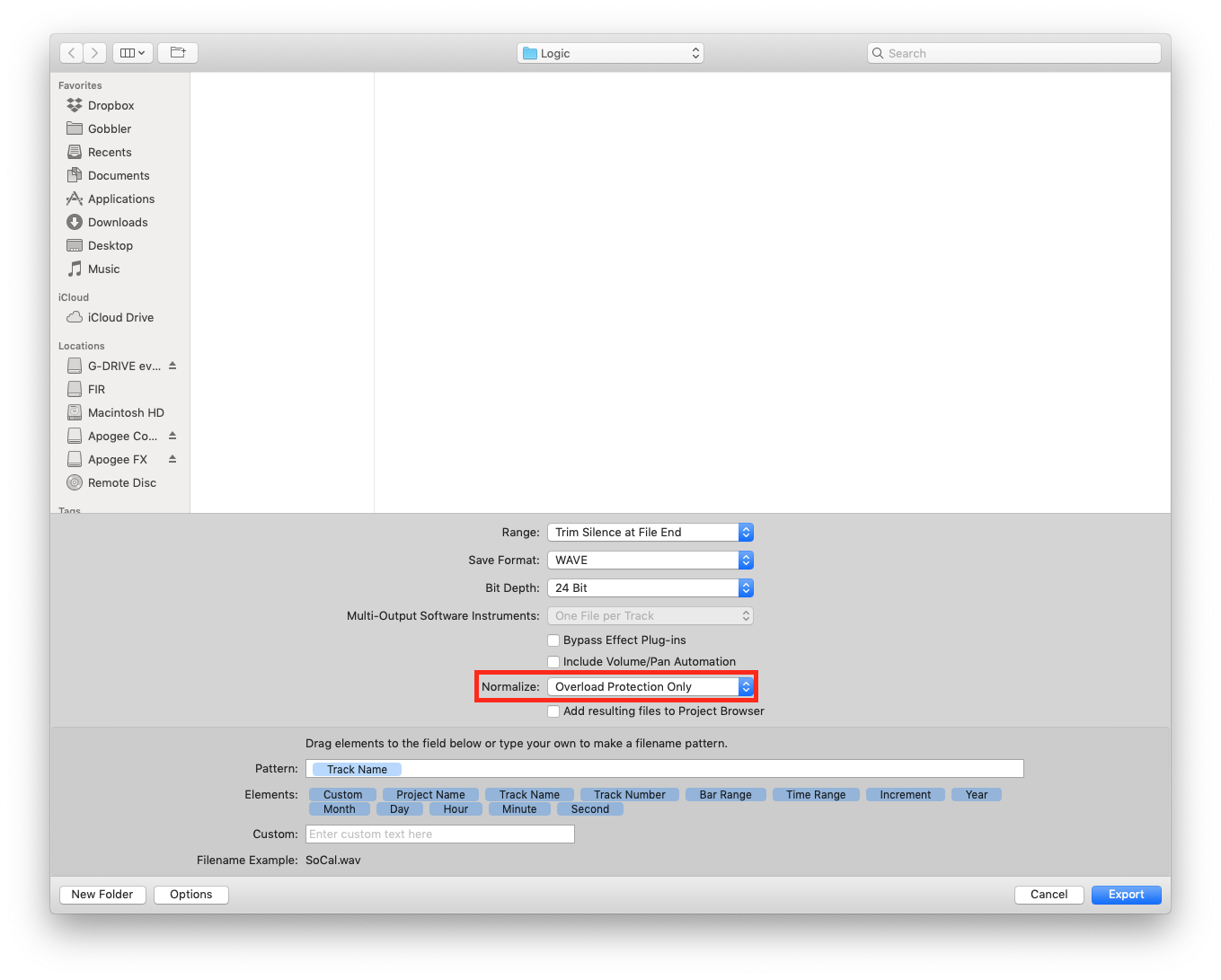 Typically we consider Normalization bad news. That’s because Normalizing boosts the volume of an Audio File to 0 dB. Which many believe is not ideal for mixing and mastering.

But Overload Protection Only is brilliant, because it turns down any audio that may potentially clip when converted into a new Audio File.

And though it turns the audio “down” to 0 dB, it’s still way better than clipping your Audio Files.

So far we’ve covered plenty of ways to protect your Audio Files in Logic:

And while all these strategies are fantastic, none of them quite solve the issue of bouncing out our final projects.

Despite new volume standards for mastered tracks, everyone still expects their masters to be loud.

But how do we add loudness without clipping our Stereo Output meters?

That’s when we call in the big guns – the Brickwall Limiter.

Brickwall Limiters are named such because they set a hard limit for how loud a track can ever be. No matter how much you push your mix against it.

And set the Output Ceiling slightly below 0 dB to ensure no clipping occurs. 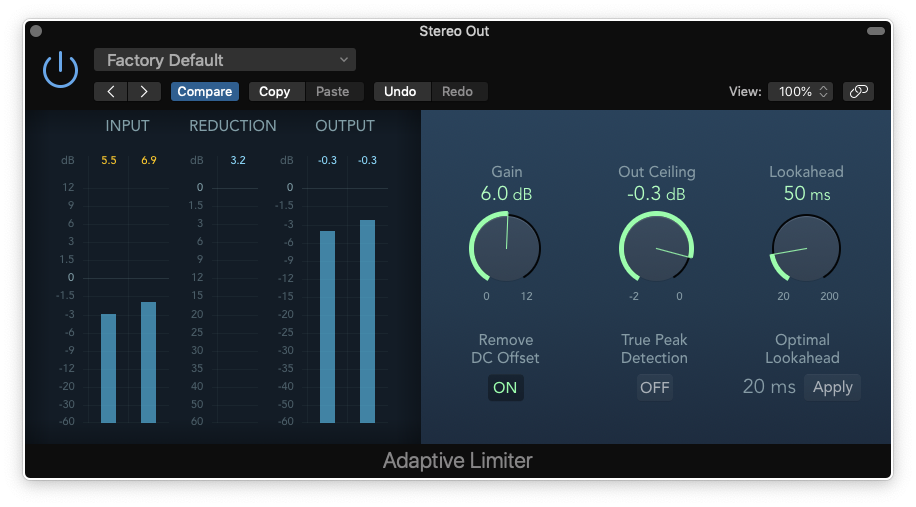 And with the Gain knob on the limiter, you can start to drive your mix up in loudness.

Once your mix exceeds the Threshold of the limiter, the Adaptive Limiter gets to work.

The limiter will start to “turn down” the volume of the peaks in your mix. Much like a Compressor. 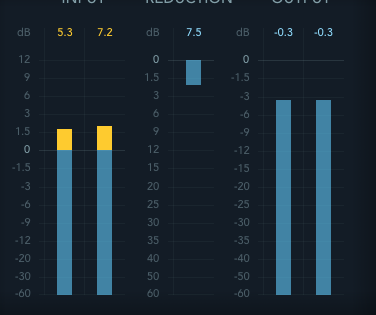 By driving up your mix into a limiter you can increase the average volume.

Sure the peaks get turned down, but we base our perception of loudness on average, not peak.

Thus – you can turn up your Project’s volume without the risk of clipping. When you go to File > Bounce > Project or Section… you can be sure your Project is safe from clipping.

So When Does Clipping Not Matter?

Surprising to some, there is actually a time in Logic when clipping is not a big deal.

For example, take a look at the image below: 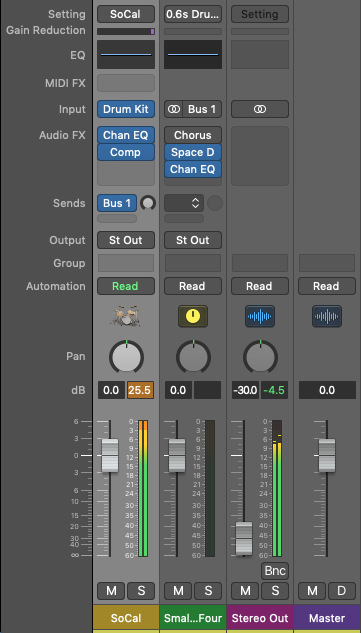 Obviously our drum track is clipping, right? We see an orange tag right above its Peak Meter.

But if you take a look at the Stereo Output, the final Output isn’t clipping at all. In fact, the volume is way below 0 dB.

Let’s take a listen to what this actually sounds like:

And that’s because Logic operates on a 32-bit floating-point system.

What that means is it’s actually impossible to clip inside Logic. As long as the Stereo Output isn’t clipping (and we’re not creating new Audio Files from these clipping tracks) all is well. We hear no signs of digital distortion.

And that’s why the tag above each track shines orange. Orange lets us know our track is potentially clipping. But it’s not of dire consequence.

But if we brought up the Stereo Output level to 0 dB our Project would sound like this:

And the tag above the Stereo Output meter will shine red like a stoplight.

And that’s because we’re now clipping outside of Logic’s internal system.

The distorted sound and red tag let us know if we Bounce our Project out like this we’ll have a clipped Bounce.

So if you like to mix hot, just make sure to:

As you can see, clipping is not something to take lightly! There are several stages which clipping can hurt your Projects:

Or to put another way – anytime we create a new Audio File.