The Logic pan pot is your tried and true way of expanding your mix’s stereo-width. With the flick of a wrist you’re able to place instruments left to right, and anywhere between.

That is, if they’re mono tracks…

Stereo tracks are a horse of another color! While the pan knob looks identical for both mono and stereo tracks – they’re actually quite different.

In today’s video and post, we explore what the Stereo Pan knob actually does, and how to get that True Stereo Panning you’re after.

It’s pretty easy to discern when a track is either mono or stereo. You have 2 places you can check:

Towards the top of your instrument’s Channel Strip in the Mixer is the Input section. And next to the Input field is one of two icons. This is the Channel Mode:

One circle denotes a Mono track:

While a second circle denotes a Stereo track:

Just like our Channel Mode icons, one meter means a Mono track:

While you would think a Pan knob in either case would move a track from left to right, that’s simply not the case.

Mono tracks enjoy the benefit of panning. But a Stereo pan knob’s default begins life a little different. Instead, it’s a Balance knob.

Since a Stereo track is two signals, you’re given a choice. Would you like all of the left and right sides? Or do you want a little less of either side? OR do you want only one side or the other?

To Balance is to decide how much of the left or right signal you want to keep.

So when you turn the Stereo Balance knob all the way to the left, you’re muting the right side. NOT panning both sides to the left.

Confused? I don’t blame you, as most tend to be. 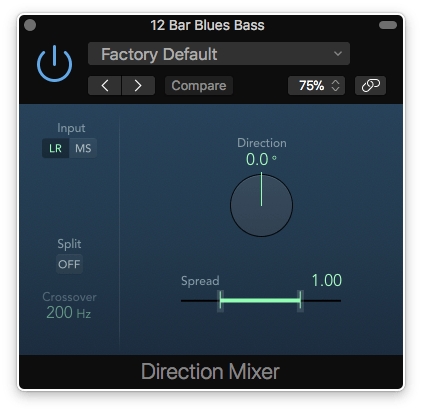 For a long time Logic users had to use plugins to work-around the lack of a Stereo pan knob. To help us, Logic includes a plugin called the Direction Mixer.

The Direction Mixer has two properties:

The Direction knob gives you True Stereo Panning. That is, when you turn the knob to the left, both left and right signals tilt to the left: 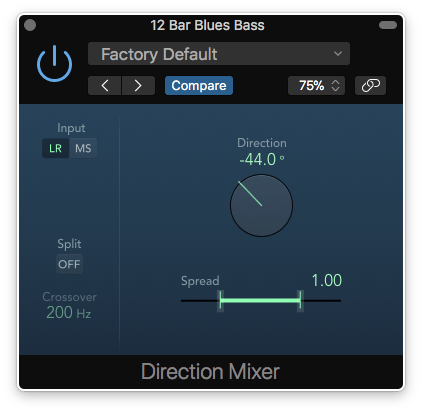 The Stereo Spread knob gives us the ability to adjust the width of Stereo tracks.

So if you’d like the Stereo-ness of your track to tighter, pull the Stereo Spread handles closer to each other: 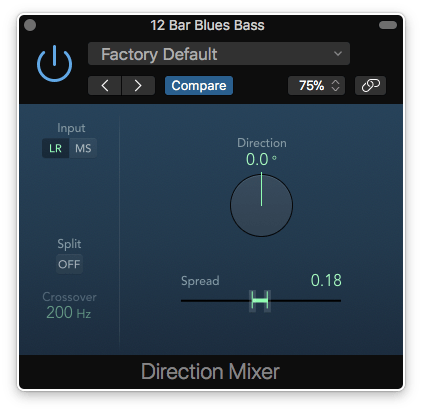 Or if you’d like the track to be wider, pull the handles further from each other: 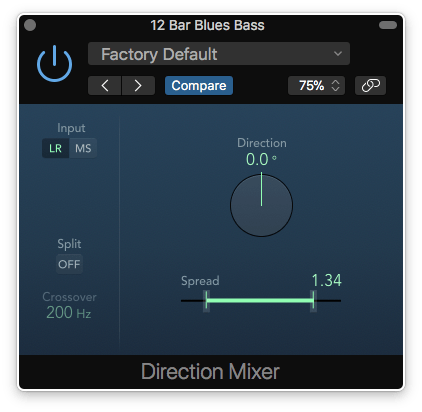 And the Direction Mixer totally works! But not as intuitive as using the Pan knob.

Plus you have to consider where the Direction Mixer sits in your plugin chain. If you use Compression, Distortion, or anything else, you don’t want to process a lop-sided stereo track.

Thankfully, the Logic team has solved this issue once and for all with version 10.3.

With the release of 10.3, Logic now has a True Stereo pan knob right within a Stereo track’s Channel Strip. To access it, you simply Control – click the Pan knob to reveal 3 new options: 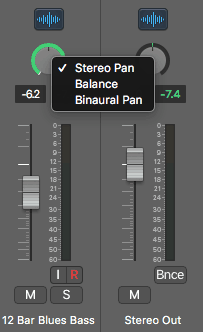 Stereo Pan is the panning we’ve been looking for all along! Balance is Logic’s default, and Binaural Pan is for more complicated panning arrangements.

With Stereo Pan, you can do exactly the same as you were able to with the Direction Mixer. But instead of using a plugin, you can use the intuitive Pan knob.

to adjust the Panning of your track, simply click the center of the knob and drag to the left or right:

And to adjust the Stereo Width of your track, grab the left or right-most handle:

Viola! Stereo Panning exactly as you would expect it to be.

For a long time Stereo Panning in Logic was… well, not logical. Or at least not intuitive!

A Stereo track’s Pan knob actually adjusted the level of the left or right channel. So we used the Direction Mixer plugin as a work-around.

But with 10.3, we can now reliably Pan and adjust Stereo Spread, no problem 🙂